If you still think airborne connectivity system, are heavy, expensive and only available to the larger aircraft then are you in for a sweet surprise. The airborne connectivity industry has made leaps and bounds in recent years and even the smallest of jets and turboprops can now enter the world of high speed in-flight connectivity at a fraction of the cost and size of previous systems. Hotspots are no longer land locked luxuries, allowing passengers to know always remain connected in flight using their same everyday Wi-Fi enabled devices, and at the lead of these changes one company that continues to push the technology farther and smaller.

Aircell a Broomfield Colorado based company, introduced the Aircell Axxess II Iridium SATCOM system in the mid 2000’s. Built around 2 channels of Iridium with an IP-PBX system, and expandable up to 4 channels of Iridium with up to 8 IP based handsets. Aircell’s choice in selecting an IP based platform provides a system easily upgradeable to future technologies such as the now available Aircell High Speed Internet system also know as the ATG 4000. 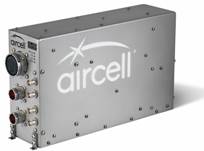 Released in June of 2009, Aircell High Speed Internet provides one of the lightest weight high speed internet systems on the market today with a weight of only 11 pounds. Utilizing the Aircell Axxess II systems Wi-Fi capabilities the Aircell High Speed Internet system allows users to simply walk on their aircraft, open their Wi-Fi enabled mobile devices from laptops to iPhone and login as you would in any Wi-Fi hotspot on the ground. Users can now easily surf the internet at speed up to 56 times faster then that of standard dial up connections.

Aircell High Speed Internet utilizes a network of ground based 3G towers to provide a  seamless coverage from 10,000 feet and above over the entire continuous United States, with plans to expand coverage through Mexico and Canada. For users who already have the Aircell Axxess II system installed on their aircraft the ATG is the perfect addition to the already proven systems and support you expect from Aircell.

Due to the demands of a new generation of very light jets or for those customers with existing SATCOM systems, Aircell has announced the release of the ATG 5000. The ATG 5000 offers a stand

alone solution that provides all the features of the ATG 4000 including streaming video, email with attachments, instant messaging services and even access to your corporate VPN, with several service plans available.  For those whose mission profile requires world wide ops, Aircell is now shipping it satellite based SwiftBroadband system.

The Aircell High Speed Internet is a factory option at nearly all of the major business aircraft manufactures and is available on operators such as Flight Options, and the chosen connectivity option on more then 60 of the Clay Lacy Aviation charter fleet.

For more information on Aircell Products and Services and how they can improve you’re in flight productivity visit www. aircell.com or via phone at +1.303.301.3200.