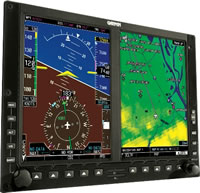 Meet Garmin G600, Garmin International’s new avionics system that combines flight, navigation, and sensor data into a glass panel display system. The G600 is specifically designed as a retrofit for WAAS-compliant light- and mid-sized aircraft that would otherwise have no alternative to analog technology.

The G600 is designed to fit into the existing instrument panel without the need to redesign or replace the panel: the 10 inch wide, 6.7 inch high system usually fits into the space occupied by the instrument six-pack. If the fit isn’t quite right, the panel can be re-cut to easily accommodate the G600.

The display of the G600 consists of two 6.5 inch LCD flat screens, positioned side-by-side in a 10-inch bevel. The PFD, on the left, displays situational awareness information regarding aircraft speed, attitude, altitude, aircraft position, and flight progress. The MFD, on the right, displays a moving map. Pilots can choose to overlay real-time weather, terrain, air traffic, or route information on the map.

The exact data available for display on the moving map varies according to which options are selected for the G600, but all configurations are based on the Garmin Base Map. This map has built-in terrain, navigation, and US obstacle databases. The G600 combines information from the terrain database to display color-coded elevation information. The moving map includes ground landmarks such as roads, rivers, cities, and lakes, as well as in-air information regarding airways, airspace, and air traffic. Once on the ground, pilots can access the built-in SafeTaxi database to see their aircraft’s real-time position overlaid on one of more than 680 airport diagrams to easily navigate unfamiliar airports.

Another major benefit of installing the G600 is that it replaces mechanical gyroscope equipment with GRS77 AHRS (Attitude and Heading Reference Systems). This referencing system produces a digital output of the aircraft’s position, rate, vector, and acceleration data and can even restart and automatically orient itself in mid-flight.

Optional additions to the G600 abound. If desired, pilots can gain enhanced situational awareness by subscribing to ChartView, a service provided by Jeppesen that facilitates easy landings by allowing pilots to overlay the aircraft’s position on an approach chart. For better situational awareness in flight, pilots can add Class-B TAWS (Terrain Awareness and Warning System) or XM WX Satellite Weather. In the case of the Satellite Weather, a GDL 69 or 69A must also be installed to gain access to up-to-the-minute weather information (including NEXAR, TAFs, METARs, wind, lightning, and storm-cell data) throughout the United States that can be overlaid on the Garmin Base Map. For an additional fee, pilots can include access to XM Satellite Radio and, with the installation of a Garmin Mode S transponder, TIS (Traffic Information Services) alerts.

Installing the G600 on a light- or mid-sized aircraft significantly reduces pilot workload and offers access to situational awareness and navigation data that would otherwise be exceptionally expensive of unavailable to general aviation aircraft manufactured without a glass cockpit. The G600 should be available in mid-2008 for retrofit on more than 400 aircraft and is expected to cost $29,772, plus installation.