Successful aircraft have one thing in common: evolution. In 1985, Israel Aircraft Industries introduced the midsize transcontinental Astra, a clean-sheet improvement over the Westwind. With a moderately swept low-wing design, the Astra was a faster model. Five years later, IAI announced the redesigned Astra SP. Its aerodynamic wing and new airframe design were credited with increasing the IFR range and allowing zero flap takeoffs. The redesigned once more Astra SPX was introduced in 1994 with new engines and winglets. Gulfstream eventually acquired the SPX and renamed it G100 in 2001.

In regards to performance, the Astra SPX made leaps and bounds from its predecessor. Its engine and design modifications, namely the addition of winglets, aid in maintaining mach .82 at its maximum range of almost 3,000 nautical miles, a great feat. This is a substantial 245 nautical mile increase from the original Astra and 185 nm from the SP.

The Astra SPX lends its superlative performance capabilities to the transition to a pair of AlliedSignal TFE 731-40-200G turbofans. Each engine provides 550 additional lbs of thrust than its predecessor at 4,250 lbs, arguably the most power in its class. The major inspection interval increased to 5,000 hours from 4,200.

Design elements distinguish the Astra SPX from other midsize jets. It is constructed almost entirely of conventional aluminum monocoque and integrates crucial drag-reducing winglets, a feature distinctive to the SPX. Its rectangular fuselage is identifiable on the ground as well as in the air, keeping frontal nose area to a minimum while maintaining a roomy cabin.

The relatively small cabin, 375 cubic feet, is typically configured in a club-and-a-half seating arrangement for six passengers. However, it is certified for up to nine. Because of its design modifications, the cabin is able to accommodate an aft, full-width lavatory and a forward galley, and has a skylight window. External baggage capacity is 42 cubic feet. Interior measurements are 4.8 feet wide, 17.1 feet long and a near unheard of height in a midsize jet of 5.6 feet.

When aircraft manufacturers were concerned with building anything that could fly adequately, Israel Aircraft Industries made strategic improvements in power and design that set the bar in the midsize category. The Astra SPX remains overall a great midsize business jet, offering range and speed in addition to ample passenger accommodations for its class. This is evidenced by Gulfstream’s acquisition and use of the design in its successful G100. 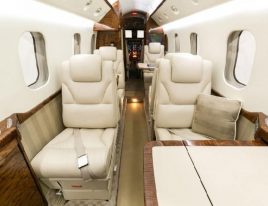 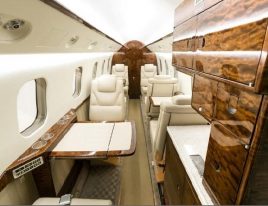 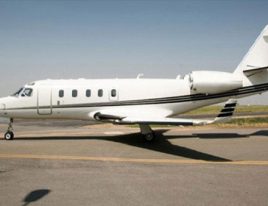 Get Market Analysis for the Astra 1125SPX