Beechjet’s first showed up on the radar in 1985, when the company purchased the design of the Diamond II executive jet from Mitsubishi.  A year later, Beech announced production of the Beechjet 400, and finally the 400A in 1989.  In production for 17 years (1986-2003), Beech built 421 of the 400 and 400A aircraft before eventually being acquired by Raytheon.  However, the Beechjet series, namely the 400A, remains a strong and successful competitor in the entry-level business jet market.

Although the 400 was a fine aircraft, Beech made leaps and bounds with its light private jet: the 400A.   Upgrades include increased payload and ceiling; greater maximum landing weight; 150 lb. more fuel storage; greater cabin volume; a rear lavatory; and improved cabin soundproofing.  These design refinements and modifications make the 400A a more efficient, spacious and comfortable jet compared to its predecessor.

Beechjet 400A receives its power from two Pratt and Whitney of Canada JT15D-5 turbo-fan engines.   Each engine produces 2,900 lbs of thrust and has an inspection interval of 3,500 hours.

These engines, along with unique design features, allow the 400A to travel 1,500 nautical miles at a speed of mach 0.78.  Its maximum speed is 446 knots, another improvement from its predecessor.  The 400A has a maximum payload of 2,172 lbs and a maximum flight ceiling of 45,000 feet.  53 cubic feet of baggage space is an additional amenity.

The 400A has undergone vast design improvements from the original 400.  It is mainly constructed of aerospace light alloys.  Three separate fueling ports (one in each wing and one in the fuselage) combine to hold 4,911 lbs of fuel.  The fuselage’s new fuel tank located under the floor allows more cabin space.  The aircraft is designed to consume fuel in the fuselage compartment first to steady the wings’ bending moment.  Additionally, the brakes incorporate anti-skid logic to allow a greater maximum landing weight.

The cabin of the 400A is more spacious thanks to the aforementioned refinements.  Carrying 7 or 8 passengers and a crew of two, the interior dimensions measure: 15.6 ft long, 4.8 ft high and 4.9 ft wide.   Passengers enjoy fully berthable seats that swivel up to 180 degrees.  A cabin baggage area and refreshment cabinet have been added.   Newly located engine mounts and the addition of sound-dampening materials makes for a more enjoyable and quieter cabin environment.

With such strong design features, it is not surprising that the Beechjet 400A serves as the basis for the military T-1 Jayhawk tanker and transport aircrew trainer.  The 400A has been continuously redesigned, and has now evolved into Raytheon’s successful Hawker 400.  Despite its age, the original iteration of the 400A still remains a strong contender in its class, and is ideal for corporate or individual travel. 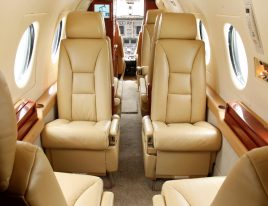 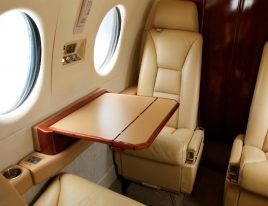 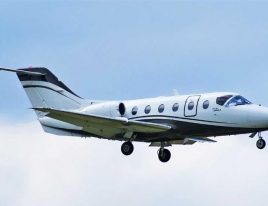 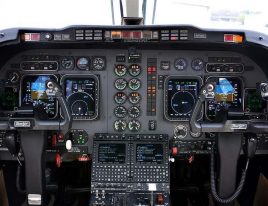 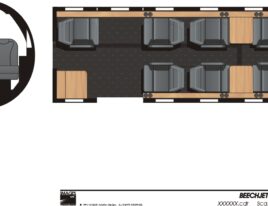 Get Market Analysis for the Beechjet 400A