Cessna always pays immaculate attention to detail in  crafting its jets.  The Citation Encore  upheld this promise with its versatility, ability to fly long distances, and  take off and land on short runways, and carry a large load.  Inherent in its name, the Citation Encore+  offers all this and more.  Since its  introduction in 2006, 60 (as of 5/2009) have been delivered to date.

Citation has successfully made a great aircraft even  greater in the Encore+.  It offers improvements  and upgrades in almost every area of an aircraft including the engines,  avionics system, cabin interior, and performance specifications.  When compared to its predecessor, the Encore+  has a 340-lb net payload increase and higher maximum takeoff weight; longer  wings and aerodynamic capabilities; and adhesive metal bonding in place of  vulnerable and expensive to replace mechanical fasteners.

The Encore+ is powered by two pylon-mounted PW535B  engines.  They produce 3,400 pounds of  thrust and incorporate a FADEC to reduce pilot workload.  The major inspection interval is 5,000  hours.

The Encore+’s design elements have undergone modifications  as well.  The aircraft is built of  high-strength aluminum alloys held together by extensive adhesive metal  bonding.  A trailing-link on the main  gear of the retractable landing gear improves the braking system.  An increased wing-length of 20 inches  improves high-altitude flying and climb.   Heaters added to the fuel system take away the need for anti-icing  additives.  And the list goes on…

As a result of the Encore+’s vast improvements from the  earlier Encore, it outperforms most rivals in all areas.  The Encore+ has a maximum takeoff weight of  16,830 lbs, and its maximum payload is 2,310 lbs.  Its certified flight ceiling is at 45,000  feet.  The aircraft has a high speed  cruise of 426 knots.

The Encore+ is one of the most luxurious and accommodating  private jets around.  The cabin length is  17.3 feet, with a height and width of 4.8  feet each.  Having undergone extensive  cabin upgrades, the aircraft seats five passengers comfortably, but up to eight  total.  Seven large windows on each side  (11×15) outline the aircraft.  There is  plenty of storage space internally and externally, located in the forward  closet, across from the aft lavatory, in the tail cone, and a ski tube in the  aft baggage compartment.  Total baggage  space measures 71 cubic feet.

In short, if the Encore is a dream-come-true  private jet, then the Encore+ is an even better dream.  Every single feature of the Encore has been improved.  The Encore+ can carry heavier loads, longer  distances, and can still keep the passengers comfortable and the pilots  satisfied.  The Encore+ is versatile,  economical, luxurious, high-performing. . . and even looks great on the  runway. 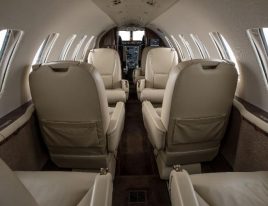 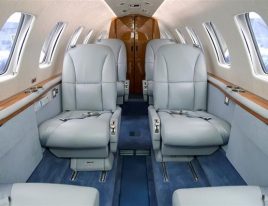 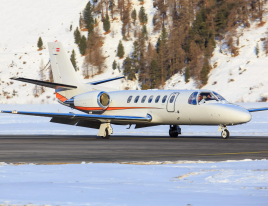 Get Market Analysis for the Citation Encore+