Bombardier’s midsize Learjet 60XR is the last iteration of the legacy of Learjets. This legacy derives from a long line of aircraft developed by Bill Lear in 1963, beginning with the original Lear 23. The 60XR rounds out Learjet’s generation of turbofan-powered aircraft. It is an improved version of the 60, boasting a more space-efficient interior. The redesigned model took its first flight in early 2006, and it remains a strong competitor in the medium-range business jet category.

Based on the large-cabin 55 series, the Learjet 60XR increased in size and performance value. It is the first of the line to use PW305 turbofan engines instead of General Electric engine models.  The Pratt & Whitney of Canada PWC305A have 4,600 lbs of thrust each. They have an inspection interval of 6,000 hours.

With such powerful engines, the Learjet excels in performance against competitors in its class. It can out-climb any mid-size jet, capable of a staggering 6,000 or greater feet per minute (FPM) climb. It can reach Mach 0.81 and is certified at a 51,000 feet flight ceiling. One might think that fuel efficiency would suffer when accommodating such high performance specifications, but the 60 Model surpasses in that category as well.

Bombardier designed the Learjet with performance in mind. Its wings feature the drag-reducing winglets that were prevalent on the older “Longhorn” Learjets.  A 43-inch fuselage stretch increases cabin volume by 11% from the 55 series. The 60XR features a digital steer-by-wire nosewheel and an electrically-heated windshield, all of which are recognizable design improvements over previous Learjets.

The 60XR’s greatest difference from its predecessor is in the cabin design. The cabin measures 5.7 ft high, 5.9 ft wide and 17.7 ft long. This space is sufficient for six passengers: four-seat club and two additional, forward-facing seats.  Although not impressive compared to similar competitors, the interior space is 3 inches wider and 43 inches longer than Learjet’s own 55 series. Design improvements include a larger galley, increased aft baggage area (59 cubic ft), 5 different floorplans, and the addition of a cabin management system featuring control modules and electronic power ports.

The Learjet 60XR upholds the fastest and highest flying performance reputation that separates Learjets from competitors. More than 300 have been delivered since 1993 and retail around $13 million. However, the 60XR is not as competitive in cabin size and range. 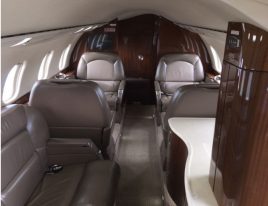 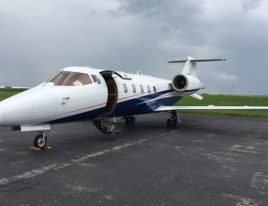 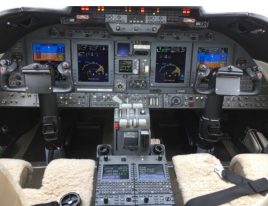 Get Market Analysis for the Learjet 60XR