Israel Aircraft Industries bought the 1121 Jet Commander design in 1968, producing it under the name Commodore Jet. The ten-passenger Westwind I was produced in 1972 with a stretched fuselage. In 1980, IAI announced a second go-around, the Westwind II, with redesigned wings and the addition of winglets. The Westwind II used advanced technology of the time, while maintaining the price/performance ratio of its predecessor.

The Westwind II’s winglets are its most notable improvement. Positioned atop the tiptanks (while most aircraft substitute one for the other), the usual winglet design was proven to be more effective and improved the lift-to-drag ratio.  Another improvement the Westwind II has over its predecessor is what IAI refers to as its Sigma wing, a re-contoured wing that holds 1.5 more fuel; allows for a higher takeoff weight  (500 additional pounds to 23,500 lbs); reaches a 2,000 feet higher initial  cruise range; and increases range by five percent.  The Westwind II has an identifiable low-slung fuselage, reminiscent of the Aero Commander from which it is derived.  Due to these modifications, the Westwind II enjoys greater operating weights and improved hot-and-high performance evidenced by the aforementioned numbers.

The Westwind II is powered by two Honeywell TFE731-3-1G turbofan engines, the same as its predecessor. Each engine is rated 3,700 lbs of thrust and the inspection interval is 4,200 hours.

The cabin is relatively small but features a divan, common in larger, executive-class business jets. The Westwind II is capable of accommodating seven passengers in a four seat club and a three-seat, side-facing divan. Across from the divan is a galley/refreshment center. A full-width lavatory is also a cabin feature. The cabin measures 4.9 feet high, 4.8 feet wide and 15.9 feet long.

Although outdated, the Westwind II remains a viable option in the medium-range private jet category. Its airframe makeover is accountable for major performance improvements over its predecessor. You can still find the Westwind II for sale or to charter. Because its design is so distinguishable, you’ll know it when you see it. 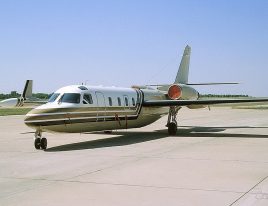 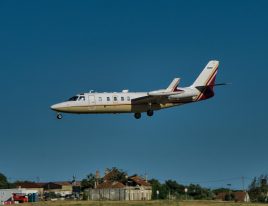 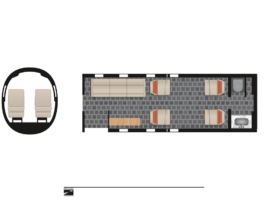 Get Market Analysis for the Westwind 2