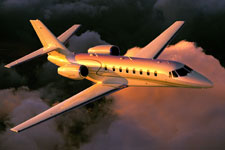 For a jet that has been on the market since 2004, the Cessna Sovereign has quite a legion of fans.  Pilots and passengers love its versatility, coast-to-coast range, number of passengers the aircraft can accommodate, simple systems, and cabin comfort.  After all, a midsize jet that can fly non-stop directly from California to Hawaii economically in five and a half hours is appreciated and well received by owners.

The Sovereign shows off a plethora features that make many midsize private jets so advantageous.  It can take off in less than 4,000 feet, (which few midsize jets are able to do), and cruises at around .75 Mach (458 knots), thanks to its unique wing. The Sovereign is a step up from the other Cessna Citations by incorporating a 16 degree leading edge sweep and a 12.7 degree sweep at the quarter cord.  The Sovereign’s design vastly improves airflow and lift capabilities as well as allows for shortened takeoff requirements and swift cruise speeds.

The 5,600 lbs of thrust each Pratt & Whitney Canada PW306C turbofan engine provides on takeoff certainly helps keep takeoffs short and energetic, too.  Even better, the engines were flat-rated to landing at most noise-sensitive airports.  The engines have an engine-driven system as well as a DC-powered backup system which can be used during the startup process.

That’s just part of what makes pilots happy to fly the Sovereign. The Citation series was designed with the intent of simplifying flight as much as possible.  That philosophy carried over from those first jets into the more mature Sovereign. Pilots also praise the Sovereign’s ability to correct itself in-flight due to the engine’s automatic shut down and stall control features.

For the passenger, the Sovereign’s cabin is 25.3 feet long and can be configured with eight or nine or more swiveling seats that rotate as far as 180 degrees.  The interior is large enough so passengers can stand up in the 5.7 foot-high cabin.  Best of all, it can be cooled before the flight by utilizing an APU.

You will find the baggage area in the Sovereign ample and one of the largest found in midsize jets at 135 cubic feet. It holds around 1000 pounds. The competition, well, can’t compete.

The cabin has a closet that easily holds full-sized garment bags meeting your additional storage needs.  Thanks to the double-sliding hard doors partition.  A dimmable LED lighting system was installed to increase passenger comfort and cut down on production costs.

The Sovereign’s taxi and landings are smooth due to the trailing-link landing gear.  The landing gear will last for more than 300 landings due to impressive the carbon-carbon-brake system.  The Sovereign led the industry in using the variable gearing mechanism which resulted in a reduction in pitch change and angle usually between 15 and 25 degrees.

Finally, Cessna prides itself in the safety of it’s entire line of Cessna business jets and the Sovereign is no exception. The jet is certified to the safety standards of both FAR Part 25 and JAR 25. The crew can easily handle abnormalities in flight, follow simple flying procedures and emergency systems to help prevent accidents to ensure a safe and comfortable flight.  For example, the aircraft has a seventy-six foot oxygen system as standard equipment; an additional seventy-six foot system can be added to the aircraft, as well, if requested.

If you are looking for an economical business jet for eight to twelve passengers with a combination of comfort and high performance, you may want to consider the Cessna Citation Sovereign.