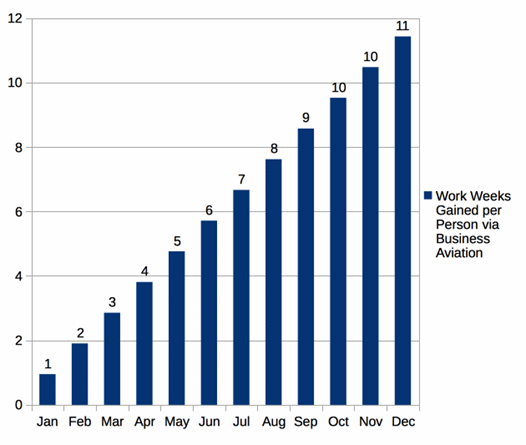 The 2015 National Business Aviation Association (NBAA) Convention was held from November 17-19 in Las Vegas, NV.  According to the NBAA, the conference had over 1,100 exhibitors and nearly 28,000 attendees.  NBAA stated this attendance was the best since the 2008 global economic meltdown, and that business aviation still contributes an estimated $150 billion to the U.S. economy.

The strong attendance at this year’s conference was another indication of the renewed interest in business aviation both domestically in the U.S. and globally.  Business aviation is a reasonable alternative to other forms of travel, especially commercial flights on the airlines.  This has been confirmed by the steady increase in the amount of business jet use since 2008.

Prior to 2008, business aviation had earned a reputation as a prudent means of efficient, secure, and predictable travel; however, the global economic decline has taken its toll on business aviation’s public acceptance.  There remain vivid images of the Big Three automakers flying to Washington, DC in their business jets to ask for a financial bailout  from the U.S. Congress, and of the bank that had recently received government TARP money just before taking delivery of two large cabin aircraft (that had been on order for years).  These companies were scolded by the U.S. Congress and vilified in the press, who called business aviation an extravagance.

One my trip to the NBAA convention last week, I flew on two different commercial airlines and spent over 22 hours in door to door travel.  If a business jet was made available to me, my door to door travel time would have been cut by 55%, saving 11 hours of my time as compared to airline travel.

Business jets serve nearly 10 times more airports than commercial airlines in this country, and that means the passengers can save time on the ground by landing or departing closer to their destination.  In my case, changing the departure airport at the Boston end would have saved an additional 40 minutes each way, though in Las Vegas, the airport would have been the same.

Assuming that a busy executive travels about 50 weeks a year, the 11 hours of time saved would become an annual savings of 550 hours.  This translates into 10-12 weeks of each passenger’s time being saved per year.  That translates into about 22% more productive time from the transportation alternative alone.

Additionally, most passengers in a recent survey claimed to be more than 10 times more likely to conduct a meeting with co-workers on a private flight when compared to an airline flight.  An airline flight is not conducive to private company conversation, while a business jet affords the proper level of security to conduct meetings without the concern of sensitive information being leaked.

Another major benefit to business aviation is that it provides a more predictable schedule.  On my recent flight I only experienced one delay of just 45 minutes, which was annoying, but didn’t cause any real problems.  On another recent trip, however, I was compelled to cancel because the airlines were 55 minutes delayed, and I would have missed my connecting flight in the next city, which would have caused me to miss my early morning meeting entirely.  Business aviation provides a more predictable and controllable schedule to meet the needs companies have.

We have all have airline stories to tell about major delays and poor service.  Realistically, can a company depend on the airlines to move their executives around efficiently or securely?

Business aviation has a tangible benefit of saving time.  Using a business jet can save each company leader as much as 10-12 weeks of productivity annually.  Those leaders can use that time to reduce costs, create new products or services, and increase stakeholder value at levels that far exceed the costs of the business aircraft.

Business aviation is good for business.