Roughly 30 years ago a statistician (Richard T. Santulli) from New York developed a plan for shared ownership of aircraft, a model we now refer to as “fractional.” The concept of a few individuals getting together to purchase, own, and share a whole aircraft was not new, but the fractional concept involved a whole fleet of aircraft to share, which was.

So, in 1986 Executive Jet (now known as NetJets) was founded as an independent company with no affiliation with any of the aircraft manufacturers. In the early years it was an uphill battle convincing the private aircraft flyer that this was a viable and supportable concept, but that persuasion was accomplished by the early/mid 1990s. Once the fractional model was accepted by private aircraft flyers, competitors to NetJets soon introduced their own fractional offerings. From 1994 to 2000, NetJets went from being the sole fractional operator to having just a 50% share of the market with four other players. 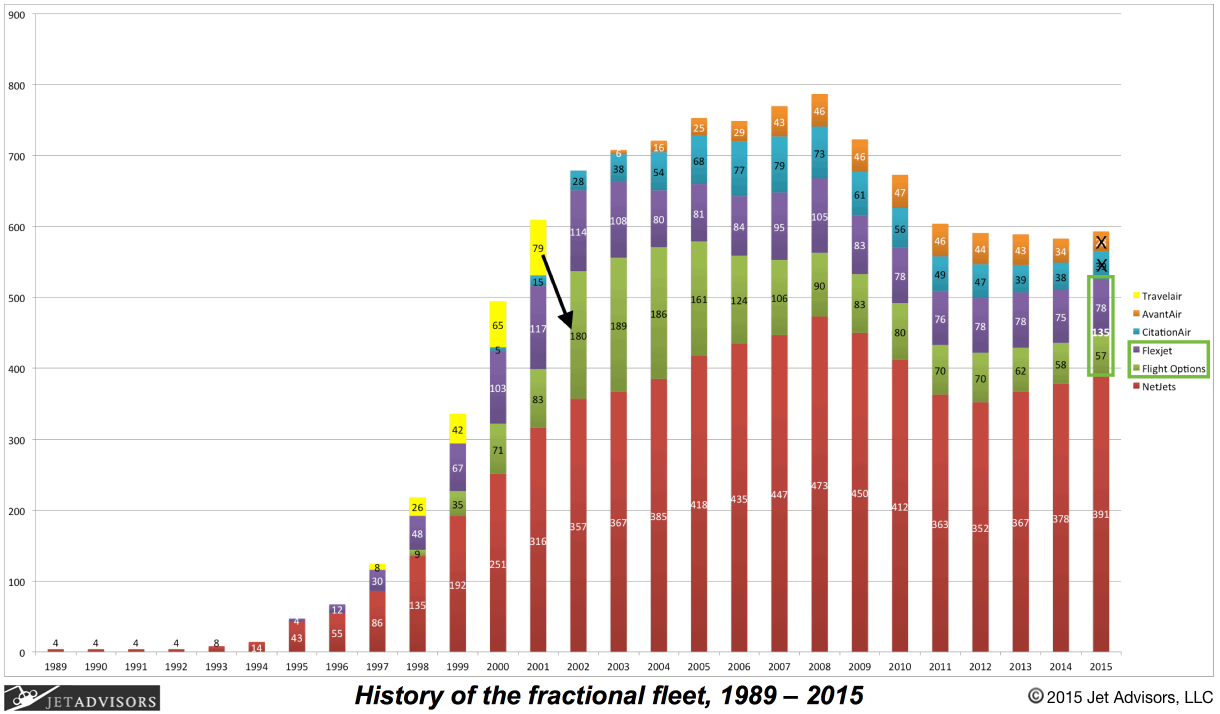 While most fractional providers offered only new aircraft, this wasn’t universally the case. Flexjet, the second market entrant in 1995, was founded by Bombardier/Learjet and only offered their new Challenger and Learjet models. Travelair was founded by Raytheon Aircraft plus Beechcraft in 1997, and thus only offered new Hawker, Beechjet and King Air aircraft. CitationAir, as its name suggests, only offered the Cessna Citation Jet line and was founded by the Cessna Aircraft Company in 2001. AvantAir, an independent company, was the only program to offer a non turbo jet fleet, making a bet in 2003 on the unique Avanti twin pusher engine turbo prop. In contrast to all of these, beginning in 1998, Flight Options was the first and only to offer used aircraft as their mainstay fleet, with a strategy of reducing the upfront buy-in cost.

The fractional provider field had gotten fairly crowded by 2000, with five operators and rapid growth – but with only two fractional providers left today, that is no longer the case! So what happened to this popular business model, and why?

The first to go was Travelair, through an acquisition/consolidation of the program by/with Flight Options in 2002. Sure enough, that year marked the end of the rapid growth period in the fractional market.

Cessna Aircraft Company ultimately decided the ownership of a fractional program was not in their best interests in 2012. Their largest customer has been NetJets, with which CitationAir had been competing. NetJets purchased Cessna products outright, whereas CitationAir was a much riskier way to derive revenue from their aircraft, because history has shown that fractional programs tend to have small margins (if any!), and they obligate the operator to long term contractual commitments, often at a loss. So CitationAir was wound down and closed in December 2014, when they surrendered their operating certificate to the FAA.

Next to leave the field was Avantair, in 2013, the bankruptcy of which was due to the fatal combination of a business model that did not cover expenses with a management that tolerated serious operational shortfalls on the way to running out of cash.

This left the three major players (Flexjet, Flight Options and NetJets) until 2014. Last year Flight Options entered into an agreement with Bombardier/Learjet to purchase the Flexjet business, its fleet, and customers, along with placing a very nice order for new Bombardier and Learjet aircraft. While Flight Options is touting that Flexjet will remain separate, and will provide an upscale offering while Flight Options will offer less expensive buy-ins on used aircraft shares, we have yet to see how this will play out in the long term.

So the fractional aircraft market is now back down to two players again, as in 1995. A key difference, of course, is that the fractional fleet is now over 11 times larger than twenty years ago. Has the market matured into a stable duopoly, or will a new wave of entrants come to challenge the incumbents? The evolution of the fourth decade of the fractional model will tell the tale.