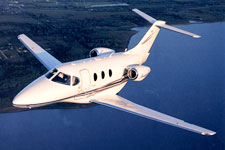 Passengers on the Premier 1A will probably most appreciate the 1A’s spacious six-seat cabin: at 13.5 feet long, 5.4 feet wide, and 5.5 feet high it is large enough to place the Premier 1A in the stand-up cabin category normally reserved for much larger, more expensive private jets. The cabin of the Premier 1A’s closest competitor, the CJ2+, is almost equal in cabin length but measures only 4.8 feet in width and 4.8 feet in height.

The differences in height and width make a sizeable difference when total cabin volume is taken into account: the 1A’s cabin is 315 cubic feet, whereas the cabin of the CJ2+ is only 246 cubic feet. Unsurprisingly, the Premier 1A’s baggage compartments are larger than the storage spaces on the CJ2+. Beechcraft’s 1A can hold a total of 77 cubic feet of baggage between internal and external compartments. The CJ2+ has a single external compartment which can hold 65 cubic feet of baggage, about 84% of the Premier 1A’s load.

The Premier 1A’s designers made good use of its generous 315 cubic foot cabin. In addition to seats for six passengers and an enclosed lavatory, the cabin has worktables, power outlets, and multiple entertainment center configurations. Depending on how the interior is configured, the cabin can include the Rockwell Collins Airshow 410, which provides real-time flight data and maps, XM satellite weather and radio, a food and beverage center with audio and visual entertainment equipment, or just additional baggage space. Sound proofing in the 1A has been noticeably improved from its predecessor, and a new “executive option package” is now offered, which upgrades cabin comfort and aircraft safety.

The Premier 1A is powered by two Williams International FJ44-2A engines, which are flat-rated to provide 2,300 pounds of thrust on takeoff. The CJ2+ uses the almost identical FJ44-2A-24 engines. Required runway length for the 1A on a standard day at sea level is 3,792 feet, and is 6,888 feet on a runway at 5,000 feet and temperature of 77°F. The CJ2+ outperforms the Premier 1A on the runway by a good margin, but cruises a little slower than the Premier once it reaches cruise altitude. The 1A’s high speed cruise is 451 ktas, a full 38 ktas faster than the sluggish CJ2+.

Despite the obvious gap in cruise speeds between the two jets, the actual flight times even out on longer trips. For a 1,000 nautical mile trip with required NBAA IFR reserves and four passengers, the Premier 1A would reach the destination in 2 hours and 30 minutes, a full seven minutes before the CJ2+. The fuel burn for such a trip is nearly identical for the two private jets: the Premier 1A would burn 2,229 pounds of fuel, only 69 pounds more than the CJ2+.

Aside from the Premier 1A’s competitive cruise speeds, stand-up cabin, and economical fuel consumption, the best part of the Premier 1A is probably its price tag: $6.205 million. Hawker Beechcraft’s Premier 1A combines the cabin of a midsized jet with the economy and performance of a light jet, an attractive option in the highly competitive private jet market.