The Citation Sovereign is Cessna’s version of what a business jet should be: comfortable, high-performing, and economical.  The strongest feature of the Sovereign is its range; it has coast-to-coast capabilities, like large jets, but still retains the features that make midsize private jets so advantageous.  It can take off in under 4,000 feet, a feat still unmatched by other midsized jets, and can cruise at around .75 Mach (458 knots).

The Sovereign’s cabin is 25.3 feet long and can hold anywhere between eight and nine or more with most seats able to swivel 180 degrees. The interior is large enough that passengers can enjoy  the 5.7 foot-high cabin.  The baggage space available in the Sovereign is the largest of comparable private jets.  The Sovereign has 135 cubic feet of total baggage space (100 cuft external; 35 internal); whereas the competing Hawker 800XP has only 48 and the Lear 60XR has only 54.

The internal closet is large enough to hold full-sized garment bags.  The bathroom, too, is spacious – passengers can change their clothes in it with the assurance of complete privacy (due to the double-sliding hard doors).  A  non-fluorescent lighting system was installed to increase passenger comfort and cut down on production costs.  The lighting system now in place has dimmable LEDs, which have a life of about 100,000 hours.  The cabin and cockpit can be cooled before starting the engines by using APU.

It should be noted that Citations are not just popular with passengers, but with pilots too.  The Citation series was designed with the intent of simplifying flight as much as possible.  The systems make sense and flight operations are uncomplicated, resulting in consistently safer, smoother flights.

For example, most of the Sovereign’s start-up functions are automatic.  If there is a malfunction while the engine is starting, it automatically shuts down.  The stall control technology is so sophisticated that pilots say the Sovereign could right itself in the event of a stall without any pilot involvement.

Trailing link landing gears are used on the Sovereign for smooth taxiing and landings.  All main landing gear have double wheels, designed to last more than 300 landings.  The carbon-carbon brake system is phenomenal as well, and is cited to last for more than 300 landings.  A variable gearing mechanism was added to constantly change flaps to their best angle for flight, usually between 15 and  25 degrees, resulting in greatly reduced pitch change.  The Citation Sovereign was the first of any business jet to use the variable gearing mechanism, once again setting it apart from competing private jets.

The one area where Cessna decided not to cut costs and simplify was probably the most vital portion of the airplane: the wing.  The Sovereign moves on from the cheap,  easy-to-produce straight wings that earlier models used in favor of a wing with a 16 degree leading edge sweep and a 12.7 degree sweep at the quarter cord.  This wing design greatly improves airflow and  lift capabilities, resulting in the Sovereign’s cruise speeds of .75 Mach.

If the Sovereign’s top speeds don’t impress, it is not due to any shortfall of its engines.  Cessna fitted the Sovereign with Pratt & Whitney Canada PW306C turbofan engines,  which provide 5,600 lbs of thrust each on takeoff.  The engines were flat-rated to minimize noise.   The Sovereign has two jet fuel pump systems, a standard engine-driven system and another DC-powered system for backup and use during startup procedures.

Safety was, of course, a top priority for Cessna when they designed the Sovereign.  Everything, from  its simple flying procedures to its many standard emergency systems, prevents  accidents and makes handling them a lot simpler.  A seventy-six foot oxygen system comes standard with an additional seventy-six foot system, if requested.  The Sovereign is certified to the safety standards of both FAR part 25 and JAR 25.

For a jet that has only been on the market since  2004, the Sovereign has done incredibly well.  Pilots and clients love its versatility, its range,  its simple systems, and its comfort.  After  all, a private jet that can fly directly from California  to Hawaii in five  and a half hours without breaking the bank has to be well-liked. 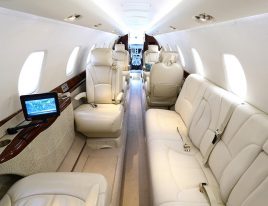 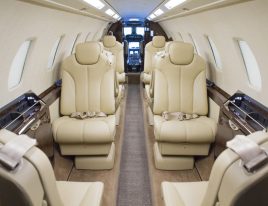 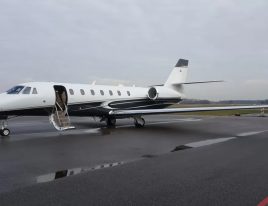 Get Market Analysis for the Citation Sovereign+

Want to Learn More About the Citation Sovereign+?

Want to Learn More About the Citation Sovereign+?