Lear is almost synonymous with “private jet.”  The Learjet 24 was one of the first private jets in production and holds many records.   Fit for short distance travel, the Learjet 24 offers more performance and utility in the small cabin, light jet category than the original Learjet 23.  The biggest difference is in the renounced single-pilot operation in favor of higher operating weights.  The Learjet 24 underwent small refinements like upgraded engines, producing A-F models.   From 1976-1979, the –F model was manufactured, offering greater range and fuel capacity, and more pleasurable flying.  And its flight ceiling of 51,000 feet was unheard of in civilian aviation at this time.  Of the 258 Learjet 24’s produced, 12 were 24F’s.

The Learjet 24F employs two General Electric CJ610-8A turbojet engines, replacing the GE CJ610-4 turbojets and CJ610-6 engines used in its predecessors.  The CJ610-8A’s are rated at 2,950 lbs of thrust each, offering more power than the Citation 1 and the Beechjet 400A.  The engine upgrade alone is responsible for greater fuel capacity and range (1,246 nautical miles), providing sufficient power for short routes.

Typically the Learjet 24F is equipped with dual Collins VHF20A comms, dual VIR30A navs, DME, FC110/PN 101 autopilot, Collins ADF206 and Sperry Primus 35 weather radar.  A bit outdated, the cockpit is still able to do everything it needs to, to complete flights adequately.

The cabin is arranged not for maximum comfort, but for utility. Its design is ideal for optimized speed, featuring a small fuselage cross-section.  The aircraft can transport five passengers, with interior dimensions of 4.3 feet high, 4.9 feet wide and 9 feet long.  Seating is configured as one bench seat, two forward-facing seats and a single side-facing seat against the starboard wall.  A pocket-sized refreshment center and a baggage compartment (accessible only inside the cabin) are also included.

The Learjet 24F places a strong emphasis on utility, not necessarily luxury or passenger comfort.  However, it can get you from point A to point B and is an ideal choice for short flight lengths. One of the pioneers of private jet travel, Lear has always upheld high performance standards and the Learjet 24F is no exception, even three decades later. 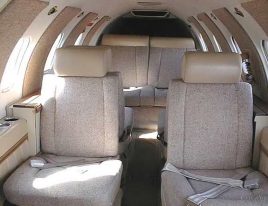 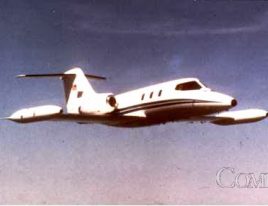 Get Market Analysis for the Learjet 24F