Lear is almost synonymous with “private jet.”  The original Lear 23 took its first flight in October 1963 and the rest is history.   While the Learjet 24 made significant leaps in power and performance, the 25 addressed cabin size in addition to outperforming both.  The most noticeable change is the Learjet 25’s stretched body.  Incorporating even more modifications, such as a recontoured edge, the Learjet 25D is more capable and accommodating than all of its predecessors.   164 Learjet 25D’s were produced from 1976 to 1985.

The Learjet 25D is highly competitive in the small cabin, light jet category.  It’s stretched cabin measures 12.1 feet, three feet longer than the 24.  This is achieved by employing a 4.2 ft fuselage plug.  Another key change in the  Learjet 25D is the introduction of aerodynamic refinements such as a re-contoured leading edge, improving cruise performance and low-speed handling,  and reducing runway length requirements.

While not spacious by any means, the cabin of the Learjet 25D offers significantly more space to accommodate passengers than Lear models.  The three foot addition allows configuration for an additional passenger, carrying six altogether.  The arrangement is four individual forward-facing seats and an aft bench seat. 40 cubic feet of baggage space (accessible only in-cabin) and a half-width lavatory are also features.

The Learjet 25D is powered by General Electric CJ610-8A engines, shared with later Lear 24 variants.   These engines are rated at 2,850 lbs of thrust apiece and have an inspection interval of 5,000 hours.  The power is greater than comparable jets such as the Citation 1 and the Beechjet  400A.  The engine upgrade is responsible for better fuel capacity and range (1,246 nautical miles).

It’s hard to go wrong with a Lear, considering it helped to pioneer modern private jet aviation. In the small cabin, light jet category, the Learjet 25D outperforms many of its competitors and all of its predecessors.  The aircraft is ideal for traveling short lengths and even accommodates better than most. 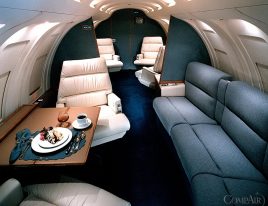 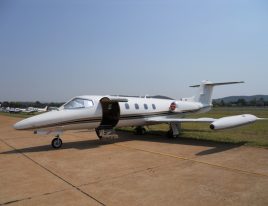 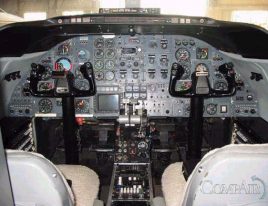 Get Market Analysis for the Learjet 25D