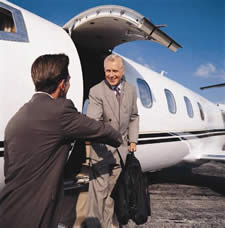 For my two-day stint as a line guy, I worked with the logistical support team, my first S4 assignment since my days in the 1/110th Calvary Squadron in the early 90’s. I coordinated liquids (coffee, water, ice, etc) for more than seventy passenger aircraft and drove owners to and from their vehicles and aircraft.

My intent is not to overemphasize my contributions (since Swift Aviation’s full-time line guys did the real work), but to remind the aircraft owners of the important roles filled by the FBO support staff.

The line guys handle all of the details between arrival to the FBO and departure – refueling, positioning, and catering. It is no easy task on a normal day to coordinate every passenger’s individualized requests, so the management of more than 450 private aircraft during one very busy weekend was quite impressive.

The line guys must provide catering for all aircraft according to each client’s unique preference. They fuel the aircraft throughout the night so the jets can leave promptly in the morning. The staff moves and restacks aircraft according to their departure time to expedite the crowded schedule. This stacking process turned out to be more complicated than I originally thought since the Last-In-First-Out method only works in the abstract for accountants to make assumptions.

After my short time as a line guy for Swift Aviation, I have a new appreciation for the ground support crews at every FBO that work in the background to make sure each flight goes as smoothly as possible.

Most (but not all) of this important work goes unnoticed. Over the weekend I was handed a tip – which I promptly passed on to the real line guys.