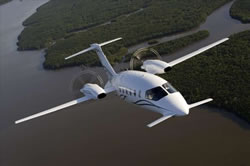 The Piaggio P180 Avanti is part of the multiengine turboprop business aircraft category.  The Avanti P180’s unconventional airframe design makes it one of the most visually unique aircraft in the sky.  Besides adding to the aesthetic, the jet’s curvature and egg-shaped fuselage were strategically constructed by chief engineer, Alessandro Mazzoni, for one key benefit: better fuel economy.

The Piaggio P180 Avanti began its development in 1981.  The first P180 prototype was flown by the Italy-based production company in 1987.  The aircraft was officially certified by Italian authorities in March 1990 and by the US FAA in October of the same year.  Less than a year later, the P180 was being delivered to customers around the globe.  Unfortunately, by this time, fuel efficiency was no longer a major concern so the P180’s advanced design and innovative features made it a slow seller and production stopped in the mid-1990s.  But because the economy is cyclical, the P180 was reintroduced in 2000 and continues to excel in the marketplace today.

The Avanti P180 is powered by a pair of Pratt & Whitney of Canada PT6A-66 turboprop engines that boast an inspection interval of 3,600 hours.  These engines set in motion five-blade, constant-speed Hartzell propellers.  The P180’s avionics suite consists of the standard three-screen Rockwell Collins EFIS or the upgraded five-screen version.  Other options include Doppler turbulence detection radar, a second ADF receiver and cabin multimedia information/entertainment systems.

As previously stated, the Avanti P180’s design is one of the most unconventional in its class.  This business aircraft is constructed of aluminum and composite materials that form three main flying surfaces: the main wing, the T-tail and, most importantly, the canard foreplane.  The canard allows the main wing to be positioned further back and to be smaller in size, decreasing the overall weight of the aircraft.  The canard also produces an additional positive lift component to that of the main wing.

Since the airframe design creates additional interior space, the Avanti P180 offers comfortable accommodations for a mid-size business aircraft.  The P180’s rather large cabin measures 14.1 ft in length, 8.5 ft in height and 6.1 ft in width, allowing a five-seat executive/VIP seating configuration.  Some of the Avanti P180’s cabin amenities include a full-width aft lavatory with sink, a forward storage cabinet, a mid-cabin refreshment center, fold-out work tables and an internal baggage compartment.

The Avanti P180’s closest competitors are the Cessna Citation CJ1 and CJ2, and the Raytheon Premier 1.  Although the new P180 is priced considerably higher (about $2 million) than the CJ1, it is the most comparable aircraft in performance and speed.  The CJ2 and Raytheon Premier 1 are faster, arriving 7 and 14 minutes sooner respectively, but a lot more comparable in price.  The Avanti P180 has two strong advantages: interior space and fuel economy.  Its sizeable cabin volume makes longer trips more comfortable and it is 20 percent more fuel efficient than equivalent aircraft.

The Avanti P180 has a competitive advantage in an economy like the current one because of its eco-friendly and fuel efficient benefits.  Additionally, it offers one of the larger, more comfortable cabin arrangements in its class.