My small Part in Helping after the Haitian Earthquake

Saturday morning my good friend and longtime customer Richard Foreman calls to ask if I would want to fly with him to take some supplies to Haiti. After a few logistical calls to clear my schedule I met Dick that night at Banyan Aviation in Ft Lauderdale Executive Airport (FXE), Dick had flown his Pilatus PC-12 from Bridgeport CT. and I airlined down from Charlotte NC. 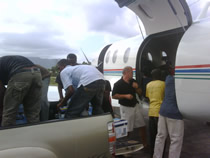 Through the coordination efforts of the National Business Aviation Association (NBAA) and an Orlando based group called Clean the world (www.cleantheworld.org ) Banyan Aviation was the center of activity for many Pilatus PC-12’s taking needed supplies into the smaller airports in Haiti. Sunrise Sunday morning we were removing all but two of the passenger seats in the PC-12 cabin, our only passengers would be a Haitian senior member of the clergy and a relief worker both American citizens. Soon 3 pick up trucks pulled up to the rear door of the PC-12 with our cargo. Destined for a town 25 miles from the capital of Port au Prince on the other side of the epicenter of this terrible earthquake is the historic port town of Jacmel. There 3 orphanages each with some 30 children were running out of food, especially baby food. The roads had been destroyed and they are now isolated from the rest of the nation. 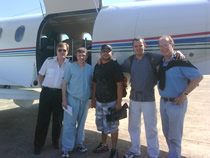 We loaded several cases of bottled water, many boxes of Similac formula and Gerber food, then 4 heavy bins of rice. Our journey would stop first at Cap Haitian another port town on the north side of the Island clear customs, dropping off our passengers and picking up two more Relief directors to return with us at the end of the day. The first leg of the trip was an uneventful two hour and 45 minute flight. We were hearing one jet holding for 70 minutes with 2 more in the holding pattern above him, many accents, from Japan, Ukraine, China, and Canada all bringing in help. The US military were operating from the Cuba base Guantanamo taking the seriously hurt to the hospital there, others were on the way north, we heard many times the passenger counts all Americans some hurt. We were told not to pay any fees that this was a humanitarian trip, as we proceeded through the immigration and customs buildings there were a few asking us for money for landing fees and departure taxes, we refused and launched for a VFR 40 minute flight over the Capitol city into Jacmel. 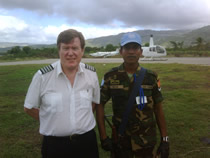 Departing Cap Haitian we could see the old 18 th century fortress still intact on the high mountains to the south. Trying to contact the Port au Prince controllers was a futile effort, the Americans now controlled the Control Tower and the ground in Port au Prince the sky was under the Haitian controllers. Now non radar with a low power radio the signal was at best weak, we could not hear a two way conversation until 25 miles from Port au Prince. Now there are many aircraft all around us all trying to get in touch with the same controller. I resorted to the basics of looking outside and watching our TCAS for traffic, then announcing our position as we transited the Port au Prince City area all at 12,500 feet. Just south of the city is a 9500 foot mountain ridge, we headed to a point loaded in the GPS just past the shoreline from there we would be clear of the mountains, descend in a circle for a landing into Jacmel’s 3300 foot runway. The tower was open, I asked for an airport advisory and landing clearance all I got back was “the wind is south to north” now just north of the north / south runway is a 1100 foot hill we lined for a left downwind eying the wind sock. The PC-12 with full flaps extended can make a steep approach, turning onto final clearing the hilltop by 100 feet we descended to a smooth landing with over half the runway remaining.

Immediately after we shut down we were met by many people, finding that we were the first relief with food to come. The older teen age orphans helped unload our cargo as we met the American family that operated the 3 orphanages who toured us of the older children’s home. We had brought some Dunkin Donuts that were well received and disappeared quickly. Next to the runway is a UN camp of Sri Lankan soldiers whom guarded our airplane, similarly the UN troops from Chile had watched our PC-12 while in Cap Haitian. The well built home had received some wall cracks from the earthquake and the whole area had been substantially shaken so much that all were now sleeping and living outside under a blue tarp. Taking a few pictures of the area you can see the tremendous poverty. After many thank you’s and hand shakes we left for a fuel stop in Provodenciales in the Turks & Caicos Islands. In Provo we found the Red Cross had set up sandwiches for the transient aircraft from Haiti. The next leg was an easy home bound one back to FXE again hearing the many aircraft calling their passenger count to Miami Center: 8 crew, 41 passengers 4 injured, require medical assistance on landing, all American.

The next morning with all the seats in place we took a Doctor from New Mexico whom specializes in tropical diseases along with a Haitian born medical interpretator and a camera guy to record their mission. Additionally we brought medical equipment including tables, gloves and instruments. Again the PC-12 was the right airplane for this trip we made the round trip of 1300 miles without refueling landing in FXE with 2 hours of reserve fuel just after lunch.

There were some 5 Pilatus PC-12’s operating in Haiti that we heard on the radio over those 2 days all privately owned and operated by very generous people helping hundreds of unfortunate victims.